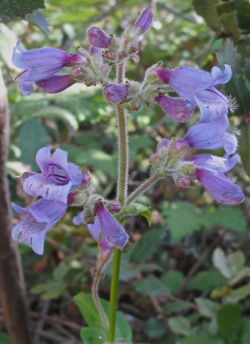 A red polygon indicates an extant occurrence; yellow indicates the occurrence has been extirpated.

This fact sheet was prepared by Grey F. Hayes, Dean W. Taylor, and Dylan M. Neubauer under award NA04N0S4200074 from the National Oceanic and Atmospheric Administration (NOAA), U.S. Department of Commerce (DOC). The statements, findings, conclusions, and recommendations are those of the authors and do not necessarily reflect the views of the NOAA or the DOC.

Openings in conifer forest or oak woodland, in recently burned or disturbed chaparral, or along roadcuts; 400–1000 m.

Perennial herb 25–120 cm tall from caudex, herbage ± glabrous; main cauline leaves thin, 25–140 mm long, narrowly elliptic, slightly narrowed just distal to rounded to truncate base (where widest), shallowly toothed, ± = basal lvs; inflorescence glandular; corolla blue-violet, 20–30 mm long, the upper portion abruptly expanded to throat, generally on upper side, ± white within, glandular externally, floor ± hairy; anther sacs 1.3–1.7 mm long, dehiscing their entire length, the valves barely spreading; staminodes bearded (Wetherwax and Holmgren 2013). In the Santa Cruz Mountains, P. heterophyllus is the only congener and is also uncommon locally (on the east side of the Santa Cruz Mountains)—it has linear, smaller leaves, a glabrous staminode, and anthers that dehisce only at the apex, the valves remaining parallel; in general it is a more suffrutescent but smaller plant.

Endemic to the Santa Cruz Mountains in Santa Clara and Santa Cruz counties.

In 2011, ca. 100 plants were reported from Bonny Doon after an area in chaparral was cleared for fire management (Neubauer 2013). A small colony in the Forest of Nisene Marks State Park occurs in a knobcone pine (Pinus attenuata) stand and has been declining as the vegetation density increases. Field surveys are needed to determine the status and trend of this species.