Illustration from Abrams and Ferris (1960)

Photo taken in the Scott Creek watershed by Dylan Neubauer--a similar habitat to that where the species has been found.

The yellow polygon indicates the occurrence has been extirpated 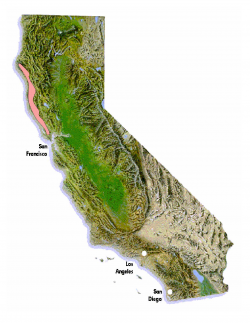 This fact sheet was prepared by Dean W. Taylor under award NA04N0S4200074 from the National Oceanic and Atmospheric Administration (NOAA), U.S. Department of Commerce (DOC). The statements, findings, conclusions, and recommendations are those of the authors and do not necessarily reflect the views of the NOAA or the DOC.

Last recorded in our region at the Camp Evers marsh site near Scotts Valley in 1944, an area that was subsequently developed thus causing the extirpation of this along with many other rare or disjunct species. Suitable habitat in the Watsonville Slough and the Scott Creek watershed requires additional field surveys.

In coastal Marin County, from Gualala to Manchester, there are small populations on wet shaded roadbanks and in fairly dense vegetation in seasonal standing freshwater. The plant is doing well at Pt. Reyes National Seashore in freshwater marshes and by springs and seeps in openings in the Bishop pine forest. The weak-stemmed plants are especially susceptible to trampling and consumption from heavy cattle grazing. This situation is exacerbated in dry years when grazing pressure increases in the marshy areas the plant favors. Light grazing seems neither to help nor hinder plant populations. In areas where livestock grazing has ceased, the plant has been outcompeted by other natives, and, less frequently, non-natives—especially in wetter years. Populations in Mendocino County have been negatively affected by logging operations.