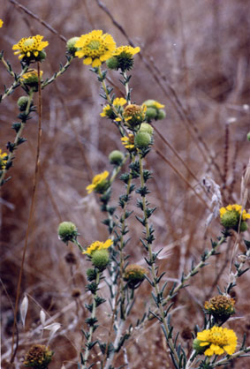 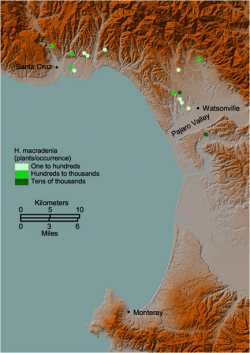 This fact sheet was prepared by Dylan M. Neubauer, Grey F. Hayes, and Dean W. Taylor under award NA04N0S4200074 from the National Oceanic and Atmospheric Administration (NOAA), U.S. Department of Commerce (DOC). The statements, findings, conclusions, and recommendations are those of the authors and do not necessarily reflect the views of the NOAA or the DOC.

Extant only in central California in Monterey and Santa Cruz counties. Extirpated from Alameda, Marin, and Sonoma counties; found in Contra Costa County only in introduced populations on East Bay Regional Parks property.

Most coastal prairie habitat in central California has been irrevocably altered or destroyed. Historically, the destruction of Santa Cruz tarplant populations was due to development (USFWS 2014). The last San Francisco Bay area population was extirpated to build a mall in 1993. Plants persist there only as artificially seeded occurrences in Wildcat Canyon Regional Park in Contra Costa County (USFWS 2014). Less than half of the 22 locations have been able to support persistent populations, however, and in recent years only four populations have supported plants (USFWS 2014). Only one population occurs in northern Monterey County (USFWS 2014). Since the 1970s, several populations have become extirpated in Santa Cruz County (Palmer 1987) and most others have declined significantly. Intensive management is required to conserve this species as small populations are particularly vulnerable to local extinction.

The species is known to tolerate grazing and to decline in pastures where grazing is discontinued, allowing weedy exotics to create a tall overstory that inhibits growth of the lower-statured tarplant and other low herbs (Hayes and Holl 2003). Several populations have had high numbers when grazed and suffered drastic declines after the cessation of grazing. One of the largest populations at the Watsonville Airport has a mowing regime that simulates grazing, has supported between 400,000 to as many as 28 million plants, fluctuating in relation to rainfall (USFWS 2014). Despite the numbers, the habitat is fragmented and heavily altered (USFWS 2014) and the site is vulnerable as improvements are planned for the Airport (USFWS 2014).