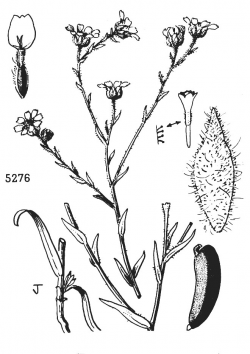 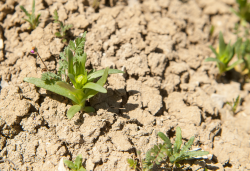 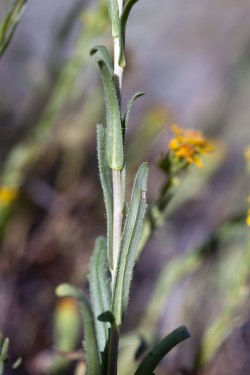 David D. Keck described Hemizonia halliana (1) in 1935, based on a type specimen (Keck & Heusi/Hiesey 2170) collected on May 4, 1933 in the “dry flood plain of Cholame Creek” in northeastern San Luis Obispo County. At the time, this was one of only two known localities—the other being Lewis Creek in Monterey County (Keck & Clausen 2774) (2). Keck described the type locality as “colored for a length of at least 3 miles ... by this species. The heavy adobe soil was deeply cracked into a mosaic pattern of blocks giving the impression that the seedlings had germinated in standing water.” He also noted that the plant had a “strong, balsamic odor.”

Keck placed the new species in section Olocarpha DC. (3), characterizing it as “the most unique of the ten species in its section,” though it shared a chromosome number [2n=20] and other inflorescence characters with H. angustifolia [= D. corymbosa (DC.) B. G. Baldwin] (4).

Barry D. Tanowitz (1982) included Hemizonia halliana in an emended circumscription of section Madiomeris Nutt., with 13 other species “allied to [D. corymbosa]” and “distributed in the foothills and valleys from central California into Baja California Norte.” He characterized members of the group as having “one or more of the following” characters: an annual habit, beaked ray cypselae, leaves and phyllaries lacking apical spines, and paleae generally fused into a peripheral ring.

Tanowitz observed that Hall’s tarplant had populations “widely scattered” and could be “locally abundant in heavy adobe clay soils on flood plains and occasionally on serpentine,” in good rainfall years, while barely making an appearance in poor rainfall years. He remarked that the plant was “particularly abundant in grazed fields,” though “numerous populations probably have been eliminated as the result of extensive cultivation.” At the time of his writing, Tanowitz noted that San Benito County had not been collected extensively, causing him to suspect that additional populations awaited discovery there.

Research on the North American tarweeds (Madiinae) conducted during the 1990s resulted in a taxonomic revision that reflected the new understanding of phylogenetic relationships within this group (Baldwin 1999). Hemizonia DC. sensu Keck was shown to be non-monophyletic, requiring its division into three genera: Hemizonia, Centromadia, and a reinstated Deinandra Greene (5). Molecular analysis revealed that “Deinandra is more closely related to Calycadenia, Centromadia, Holocarpha, ... than to Hemizonia in the strict sense” (Baldwin and Strother 2006).

A molecular study on the origin and relationships of the Madiinae published in 2000 (Baldwin and Wessa) showed that “tarweeds probably originated in the California Floristic Province and are part of a much larger, principally Californian radiation of helenioid Heliantheae.” The researchers concluded that the “annual habit and other common characteristics of tarweeds that allow occupancy of the extreme summer-dry habitats of lowland, cismontane California ... arose following divergence from a common ancestor within the Arnica lineage.”

The CNDDB (2018) cites 56 known occurrences, all presumed extant. San Benito County supports 26 occurrences that fall within five USGS quads. Fifteen occurrences fall wholly or partly on Bureau of Land Management (BLM) lands. Ca. 21 new occurrences were added after surveys were conducted in 2015, 2016, and 2017 (a very wet year) by BLM personnel, with hundreds of thousands of plants observed, primarily on vertic clay soils. In a number of these occurrences, Hall’s tarplant is associated with other sensitive species, including the morphoogically similar Madia radiata.Though threats to these occurrences are unknown, eight are considered to be in excellent condition.

Fresno County supports 22 occurrences falling within ca. eight USGS quads, with two of those straddling the San Benito County line. Fourteen of these occurrences are located wholly or partly on BLM lands. Many of these occurrences were surveyed for in 2015 and 2017, at which time tens of thousands of plants were documented with one occurrence numbering “in the millions.” Threats include recreational vehicle use and impacts from grazing.

Monterey County contains three occurrences, falling within three USGS quads, with one occurrence straddling the San Benito County line. These occurrences are based on old specimens, and only one has been relocated. This occurrence falls partly on BLM land, with thousands of plants observed in 1998. Threats here include grazing, trampling, erosion, and recreational use. Ownership of the other two occurrences is unknown, therefore fieldwork is required to document current conditions.

Four occurrences are located in San Luis Obispo County, falling within two USGS quads and including the type locality. The most recent surveys (1998) documented hundreds of plants, with threats including grazing, non-native species, trampling, erosion, development, and agriculture.

One occurrence based on old collections near Cottonwood Pass is in the vicinity of the Kern, Kings, Monterey, and San Luis Obispo county lines. Fieldwork is required to determine its status.

1. Hemizonia: Greek hemi, half, and zonia, zone, the bracts but half-enclosing the fruit. Dr. Harvey Monroe Hall (1874–1932) was an American botanist and professor associated with UC Berkeley and Stanford University. An authority on the Asteraceae, he conducted “pioneering biosystematic investigations” along with others “on various lineages of Madiinae” (Baldwin 2006, Wikipedia 2018, JSTOR 2018).

2. Ernest C. Twisselmann (1956), paraphrasing Jens Clausen (1951), stated that Hall’s tarweed was “a relict species that was much more widely distributed when the region was less arid, probably in the early Quaternary.”

4. Tanowitz (1982): “Clausen (1951) suggested that H. corymbosa and H. halliana probably once had a contiguous distribution and may recently have shared a common ancestor.”

Baldwin, B. G. 2006. Contrasting patterns and processes of evolutionary change in the Tarweed-Silversword lineage: revisiting Clausen, Keck, and Hiesey’s findings. Annals of the Missouri Botanical Garden 93(1):64–93.

Crins, W. J. and B. A. Bohm. 1990. Flavonoid diversity in relation to systematics and evolution on the tarweeds. Annals of the Missouri Botanical Garden 77(1):73–83.