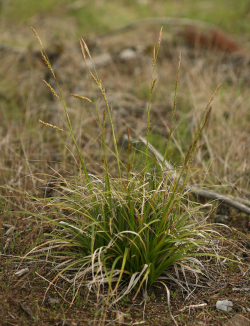 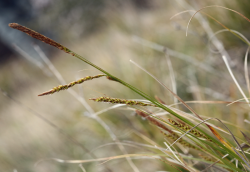 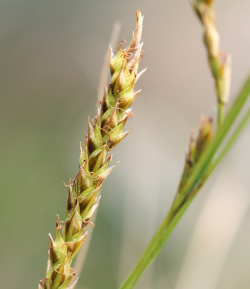 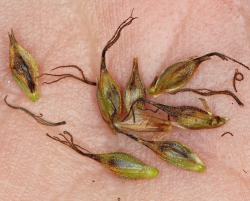 Carex obispoensis has been placed within section Hymenochlaenae (Waterway 2002), along with C. cyrtostachya, C. gynodynama, C. hirtissima, and C. mendocinensis. Like C. obispoensis, C. mendocinensis grows in “moist areas, often serpentine” (Zika et al. 2015), though it has a much wider range (central California to southern Oregon).

A single San Luis Obispo County C. mendocinensis collection exists—(Hardham 6160) from a Sargent cypress grove at the headwaters of Chris Flood Creek (San Carpoforo), where the plant was growing in serpentine (CCH 2017). The nearest collection of C. obispoensis is from a Sargent cypress grove is to the southeast on Burnett Peak (Hardham 6000) (CCH 2017). Carex mendocinensis has been collected in the Santa Lucia Range in Monterey County within the range of C. obispoensis (Alder Creek, Los Burros Creek, Waterdog Creek, growing with Sargent cypress), though the two sedges do not appear to grow sympatrically. Interestingly, C. obispoensis is not known to occur with Sargent (or any other) cypress in Monterey County.

Carex mendocinensis can be difficult to distinguish from C. obispoensis, but has its proximal inflorescence bract ≥ inflorescence, and its perigynia shorter (< 4 mm long) and generally glabrous (rarely sparse-appressed-hairy near beak) (Zika et al. 2015).

This California endemic occurs in the outer South Coast Ranges (SCoRO; Santa Lucia Range, Irish Hills) and along the coast (CCo), in Monterey and San Luis Obispo counties, and in the Peninsular Ranges (PR) in San Diego County.

The type specimen was collected by Alice Eastwood and John Thomas Howell (2271) on 7 May 1936 at Steiner Creek near San Luis Obispo on a “boggy slope on serpentine shaded by Quercus durata” (CNDDB 2017). In his 1970 flora of San Luis Obispo County, Robert F. Hoover states that C. obispoensis was not known outside of the county, but was to be expected in southern Monterey County.

Hoover (1970) observes that Carex obispoensis reaches “its greatest abundance along the ridge northwest of Cuesta Pass, where it grows luxuriantly under [Sargent] cypresses” (see also Hardham 1962). This serpentine habitat within the Los Padres National Forest was designated as a Special Interest Area (Cuesta Ridge Botanical Area) in 1969 and is home to a number of sensitive plant taxa. In some parts of the Arroyo de la Cruz region—a plant biodiversity hotspot (Haydu 2012) in the northwest part of the county—C. obispoensis is “the dominant plant,” extending from the lowest marine terraces eastward, where it grows “in association with grasslands and with dwarf chaparral” (Keil and McCloud 1989).

Carex obispoensis was first collected in Monterey County in 1987 by Vern Yadon at the UC Landels-Hill Big Creek Natural Reserve (serpentinite substrate), and the sedge was subsequently found in two other locations in the county: a northern occurrence lies inland from Bixby Bridge (granitic substrate), and a southern occurrence lies in the Willow Creek watershed (serpentinite substrate). Field work is required to determine whether more Monterey County populations exist.

In 2004, a widely disjunct range extension of Carex obispoensis was collected in San Diego County in interior chaparral growing in gabbroic and granitic substrates on Sycuan Peak (a California Department of Fish and Wildlife Ecological Reserve). Though plants keyed to C. obispoensis, they had in fewer pistillate flowers (Rebman and Gregory 10325, CCH 2017). Two additional San Diego County occurrences were located in 2005 in the vicinity of McGinty Mountain (Mulligan et al. 1316; CCH 2017) within another CDFW Ecological Reserve (CNDDB 2017).

San Luis Obispo County supports 23 occurrences with a variety of ownerships, including nine on lands owned privately or with ownership unknown. Four of those occurrences are located on Hearst Corporation property, where grazing is the main threat. There are two occurrences on Forest Service land (Cuesta Ridge, Cerro Alto), with threats including non-native plants, improper burning regime, road maintenance, erosion, and cattle/feral pigs. A Bureau of Land Management occurrence near Rinconada Mine icontained thousands of plants in 2014. The type locality is on City of San Luis Obispo land, and the population there is quite small; its current status is unknown (CNDDB 2017).

In Monterey County, one occurrence is on private land and threats are unknown. Threats at the Landels-Hill Big Creek Natural Reserve include erosion, non-native plants, and changes in fire-frequency and hydrology. The Willow Creek occurrence is on Los Padres National Forest land and is potentially threatened by road maintenance and recreational activities (CNPS 2011, CNDDB 2017). ) In addition, small populations are vulnerable to random, stochastic events.